When in London after a long work day, tradition dictates that you go to the nearest pub and have a pint or two.  But I never take the traditional route and I don’t drink beer so after MY work day was over, I headed on over to the House of Lords to hear the Earl of Sandwich argue over the merits of an amendment to the Criminal Finances Bill.  Yep, I’m a political geek. 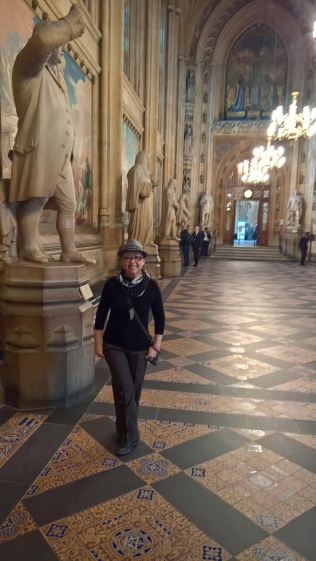 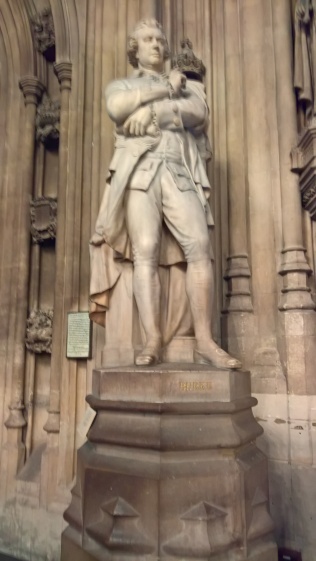 After not being able to just “drop in” last night as we walked by on the way home (due to the presence of a knife of the Swiss Army variety in Thom’s pocket), we left the weapons at the hotel and off we went.  The House Of Lords works late into the evening so by the time we cleared security after being searched, me so thoroughly that Thom asked if the security guard had asked for my #, up we climbed to the Stranger’s Gallery where visitors can sit quietly and observe.  To enforce that rule, you have to check in all your bags and cell phones with a guard before entering.

With gold-plated pretty much everything and knight statues glaring down from their lofty perches above the floor, the Earls, Ladies, Lords and such sit (and sleep) during the proceedings on red leather banquettes.  If they aren’t sleeping, they are looking at their iPads or speaking on the topic at hand.  All very formal, we snickered (quietly) when one Lord spoke of the “naughtiness” of the vigilante posse hiding wealth by buying up London real estate through LLC’s (owners anonymous) registered in British territories and driving up prices so that buying a home now costs 39x the median income of the average Londoner.  Citing one example in nearby Cambridge, a new development of 292 homes were snatched up by foreigners, primarily Chinese and Russians, with only 2 homes purchased by UK residents.  Shocking-sounds like Seattle.

I did feel quite young sitting there watching these old guys bicker and debate whether there should be stricter government control in this area of finance.  With the average age of about 70 years old and probably only 10% women, there was definitely a strict dress code with the men in suits and the ladies in skirts.  I was disappointed that the only person wearing a white ringlet wig was the youngest person in the room running the technology.  The clerks who run the notes to the Lords were very formally attired in tails and large metal medallions hanging from their bodies.  Posh.

Leaving as the debate was still raging at 7:30 p.m., Thom and I couldn’t wait to discuss the experience.  Yes, for political geeks, this was the highlight of our London trip.  Cheers!