London has THE BEST parks.  Friday after checking into St. Ermin’s, we immediately set out to explore and push on to avoid the dreaded jet lag.  Unfortunately, we hadn’t gotten any local currency yet so when I tried to use the public loo later in St. James Park, I discovered there was a 20 pence coin required to gain entry.  WTH!  You have to pay to pee?  Thom’s solution was a suggestion to walk all the way back to the hotel.  NOT a  really timely choice so I went with my own solution-act really pathetic and prey on kind strangers who DID have the required coins.  Bingo!  Within seconds of asking the closest coffee kiosk barista in the park for directions to an ATM and explaining the situation, another customer quickly found the right coin and offered it to me, rolling her eyes at Thom and telling me there was no need to walk anywhere and she was happy to help me.  There you go!  Afterward, I promised Thom that I would “pee it forward” and help other desperate ladies out next time I go, keeping a stash of required coins just in case.  Ladies need to stick together!

Later, we checked out Golden Square on the way to Carnaby Street.  A park with stunning public art AND a communal ping pong table in heavy use, this may not be on visitor’s “hot” list to see but it was just lovely.   Shoe lovers will appreciate the largest stiletto you will ever see.  Now that’s art!  None of that crazy abstract crap you have to figure out in museums. 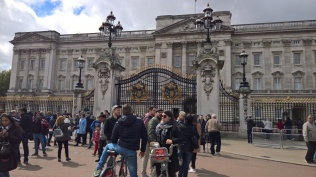 On Saturday, we headed out to the most popular spots:  The Green Park, Hyde Park and Kensington Garden.  Very close to our hotel, The Green Park showcases Buckingham Palace on it’s perimeter.  While we didn’t see the changing of the guards, we did check out the guards and the massive palace.  Really, who needs all that space???  Looks like a big money drain to me.  Walking through the Wellington Arch and checking out the many war memorials, you are reminded everywhere in London of WWI and WWII.  So many lives lost.

Right next door to The Green Park is Hyde Park, totally deserving of all the accolades I read out about it in the travel books.  From the cheap ($2 euros a day) bike rentals to the large lake with paddle boats and rowboats and horse trails, it is amazing.  Thom quickly got a hot dog to wolf down for energy before our long walk.  My only beef with the park system is the lack of trash cans in all the parks.  What’s up with that London?  Surprisingly given the lack of receptacles, the parks are very clean but the few trash cans overflow like crazy, the only unsightly view in the otherwise clean space.

Hyde Park even has chairs you can rent by the day to relax and gaze out at the water.  Very reminiscent of Central Park in NYC, one of my favorite places, people were stretched out on benches and the lawn enjoying the rare sunshine.  And can I say, the dogs here are SO well behaved it’s crazy.  Off leash in the parks, I have yet to see dogs growling or fighting.  They just walk docile and obedient with their owners by their side. Thom asked one dog owner why the dogs are so calm and he replied, “Lots of opium.”  Be calm and drug your dog?  I’m sure he was just kidding.  Probably.

Right next door to Hyde Park is Kensington Gardens.  We were needing a break from the sun so we ducked into the Serpentine Gallery on the park grounds to check out the spring show featuring the work of John Latham, a pioneer of British conceptual art (1921-2006).  Thought-provoking for sure, the use of books was prevalent in the conceptual art pieces.  Interesting exhibit but the bathrooms had the best technology I’ve seen.  Dyson water faucets also served as hand drying jet blasters–all in one and very cool.  Better than the art!  Heading over to the Prince Albert Memorial we enjoyed watching an intense street hockey game.  Damn, they were good.  Hockey scouts need to be checking these dudes out for their teams!

Moving on, we checked out Kensington Palace, with the beautiful Diana White Gardens to mark the 20th anniversary of her death.  We did feel that the security was pretty darn lax and gates were unguarded and would be too easy to hop over.  What?  In fact, walking down embassy row later in the day past all each country’s gorgeous building, we didn’t see any armed guards except for the Israeli post where they were armed with impressive weapons.  In China when we walked Embassy Row, you would see armed guards in front of every embassy.  Here, one guy came running out of an embassy yelling “YO!” to the Domino Pizza guy at the curb to deliver a hot pie.  Classy. 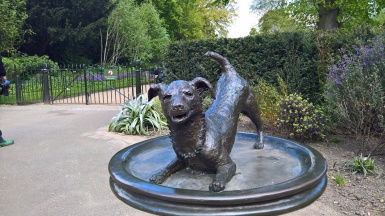 We tried walking by The Orangery next to Diana’s White Garden but a very fancy, or as the Brits would say “posh”, wedding was going on so here the security was tight and we were politely turned away.  So, they guard weddings better than they do embassies here in London?  With top hats and tails for the guys and long gowns for the ladies, this wedding was one fancy event.  We considered trying to crash it but thought better of it and moved along to continue our 11 mile hike that day.  What a great day!