Gloria Steinem showed up in Boise, Idaho on Monday afternoon.  Amazing.  Sadly, there aren’t a lot of Dems who are courageous enough to live a Blue life in a Red state so the crowd to see her was small.  It’s hard and it’s discouraging to fight the tidal wave of Red.  We did it for 14 years in Coeur d’Alene and while there are more Dems in Boise, especially in the North End where we have a house, Dems are still a major minority.   For the few who showed up yesterday, they were treated to an intimate hour with an awesome woman who has and always will make a difference. 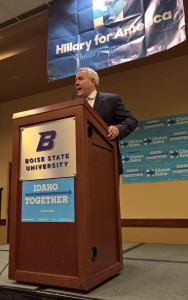 As Mayor Dave Bieter, a Dem, announced to the audience when introducing Gloria, we were all in a “safe place” for the next hour spent together surrounded by Hillary election signs.  Let’s enjoy it.  “How many of you have been in a room where you were the only Democrat?”  Hands up EVERYWHERE.  Just as I have often been the only women in meetings at work, you learn how to snap to the norm of being the outsider and understanding no one will listen to your ideas.  Just the way it is.  You never give up and you keep working hard.  That’s what Hillary does and I respect her for it.

Gloria spoke of the election and how Hillary is the most qualified candidate there ever was or probably will be but, since she is a woman, she has always had to justify her desire to do good work and aspire to be a First Lady, Senator, Secretary of State and now President.  A man with ambition like that would be regaled as a strong leader, the woman a pushy bitch.  Not fair but true.  As far as her views on Trump, he is “a con man and not a successful business man” as he would like to boast and have everyone believe.  Gloria comes from NYC and has seen his shenanigans up close and personal.  She knows. 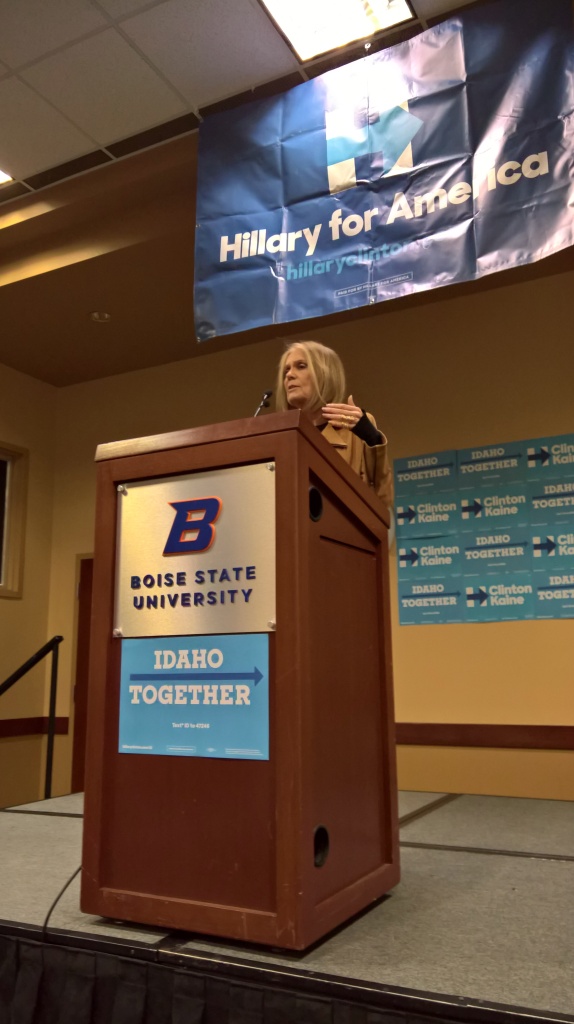 When I asked her how we would need to heal as a country after Trump has brought out the violent, racist rhetoric that has frightened us all, she gave an interesting reply.  The people supporting Trump are revealing their truth about themselves so we can have the opportunity to address the real underlying problems–their feeling of white entitlement and living in the past waiting for jobs vs. proactively preparing for the jobs of the future.   Gloria quoted Gandhi, “The truth is revealing itself.”  Those well-paying but hazardous coal mining and logging jobs aren’t coming back to Ohio and Pennsylvania and Idaho.  We need to train those workers to take on new roles and spur the economy.  Let’s not lie to them that once Trump makes America great again that he can restore those jobs.  He can’t and he won’t.  Period.

Gloria reminded us that Trump doesn’t represent the majority of the people and has always had a hard time polling above 40%.  We can’t give him power to speak for the people of this country.  We can’t let hate trump love and kindness and real conversation about what we need to do to further our America that is already pretty damn awesome.  Thom and I often reflect that if more people had passports and travelled widely that there would be a deeper appreciation for how great America already is.  Once you have seen the pollution in China or seen how hard the citizens of Hanoi work to just eat and have a roof over their heads, you can thank God that we have laws and regulations here that keeps Americans safe to breathe the air, eat the food and work in a healthy environment.  We are blessed and our government system, while not perfect, protects it’s citizens.

When asked by a former Bernie supporter how to vote in this election, she encouraged him, as a lifelong socialist herself, to follow Bernie’s lead and support Clinton.  Bernie did what he felt he had to do and was successful in raising important issues like college debt. Together, he and Hillary have found a compromise with a real chance of working to reduce debt for those in need.  That’s Hillary’s strength and why she will be a good President.  She understands mediation and finding a middle ground to get shit done.  God love her and let’s get out the vote to make sure that a President Trump never happens in his or our lifetime.  I’m.  With.  Her.