“I’ve got 300 euros bet on Hillary.  She’ll win.”  The Irish vinyl shop owner filled us with confidence after a hearty political debate.  “Hope to God you are right!” I replied. 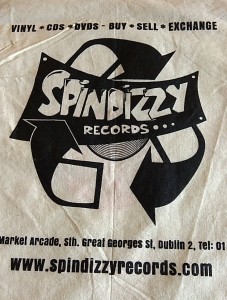 Thus ended a very spirited conversation that began the moment we walked into Spindizzy Records in the heart of Temple Bar in Dublin.  (http://www.spindizzyrecords.com)

I overheard a customer and the shop owner reflecting on the crazy election race we find ourselves in where a reality show guy could be President.  “Are you people out of your fauwking minds?”  Why, yes, in a world where Trump could be elected as our leader, a basket of the voting public is obviously uninformed and looking to be saved by Cheeto Jesus.  Like he cares about anyone but himself.  Not.

I weighed in and said that realistically he could win and then Mr. Vinyl made a mistake.  He said that Hillary wasn’t much better than Trump so it didn’t really matter.  Oh NO he didn’t!  Thom took up the conversation then stating Hillary’s qualifications and defending her honor.  Is she perfect?  Nope.  Neither am I but seeing that Trump is a psychotic, pathological lying racist among other things, while Hillary has the skill and the ability to be our leader, it is very much a clear choice who to vote for.  Trump can not and should not win.  Period.  Mr. Vinyl listened and agreed reluctantly and reinforced that Irish politicians are incompetent so he shouldn’t be talking about American politicians as being any better. He watches the election results like he watches our Super Bowl-both with bets placed.

With a good selection of vinyl to browse and politics to discuss, we stayed awhile and enjoyed the conversation.  He recommended a good pub and then another customer weighed in with her choice of a “real” Irish establishment we could go to for music and some spirits later.  Hopefully my jet lag will subside by then-last night I went to bed at 6 p.m., got up at 1 a.m. for an hour or two and then back to sleep until 8 a.m.  Damn.  Missed out on the Irish music last night but am determined to go out tonight after a long nap, of course.  Cheers!