There was a sharp contrast between the joy of the Seattle Police Department officer kissing her girlfriend with the crowd cheering them on to the families holding hands as they waved rainbow  flags and the smiling faces of every group marching vs. the hateful signs of the anti-gay protestors.  As Lin-Manuel Miranda evangelized at the Tony Awards, love is love is love is love…and why people can’t embrace that love is beyond me.  Love trumps hate and today that showed as the participants kept on smiling despite the horrible messages being displayed along the Seattle Pride Parade route.  Love wins!

Last year we marched in the Pride Parade with the Seattle Storm contingent and had a great time handing out bam-bams.  This year, after serving 352 people in need a hot meal at the Shared Breakfast at First United Methodist for three hours, we decided to skip walking and instead cheer on the Pride along the route.  First, we hit the Seattle Center and I was glad to see that many major companies have woken up and were supporting the LGBT community with their presence, giving away a huge array of rainbow beads, wristbands, mints, pinwheels, etc.  We signed petitions for gun control and against the I-1515 Washington anti-transgender bathroom initiative.  Thom was wearing his “I’m a gun sense voter” so the anti-gun ladies had him pose for a publicity photo.  Always the model he is!   Hopefully taking advantage of the huge crowds will further these issues that are so vital to protect all people. 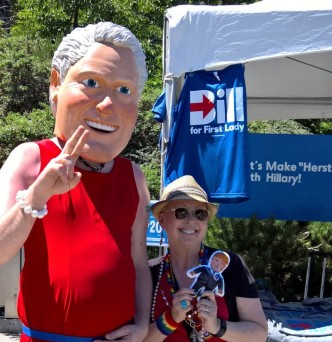 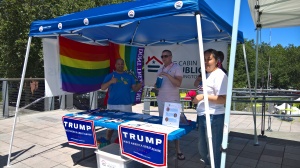 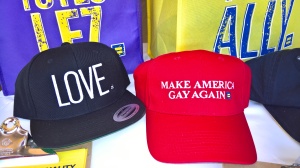 There was huge support at Pride by Seattle government agencies and officials from the Seattle Supreme Court to Seattle Metro Transit.  Politicians had booths as well as many religious affiliations but the odd man out (literally) was the Trump booth.  Unable to stop himself, Thom went off on the staffers because they had the gall to show up and represent their candidate who has vowed to stack the Supreme Court with justices who will repeal gay marriage rights.  “How could you sell your souls just because this is the party nominee…that’s DISGUSTING!”  I pulled him away to get a cookie from the church ladies and move on to other less stress-inducing booths.  I did have to love the “Bill for First Lady” t-shirts and just had to pose with “Bill” after trying out sticking pins into the Trump voodoo doll.  Very satisfying indeed. 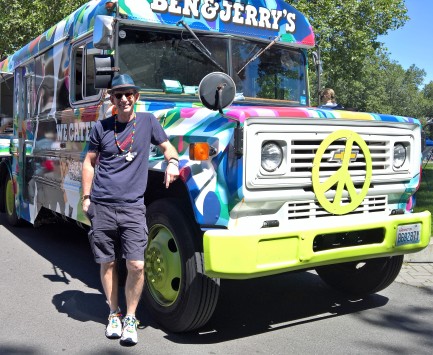 At the end of the day, Pride 2016 celebrated people.  People who have the right to love who they want and be who they are in peace and without violence and hate.  Simple.  Be kind.  To all.  Oh, and dance like there is no tomorrow.